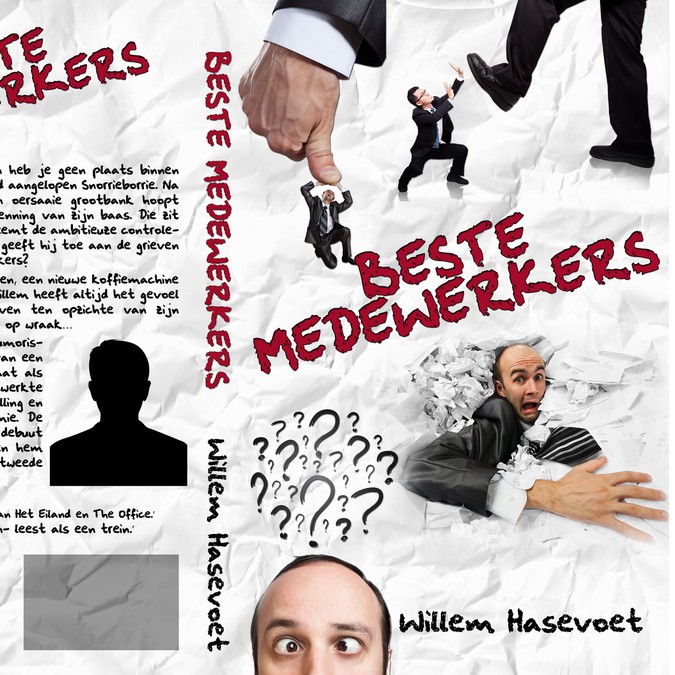 Create a cover design for a humoristic novell style 'The Office' 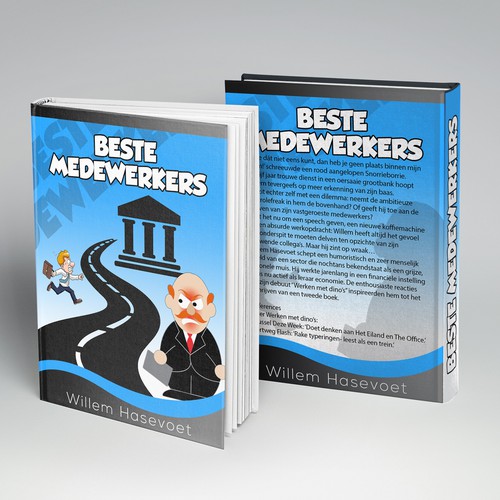 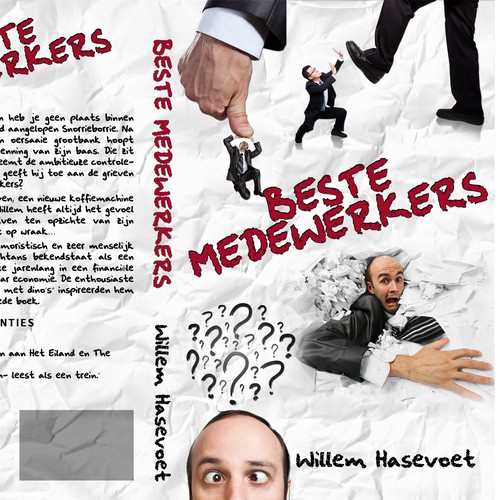 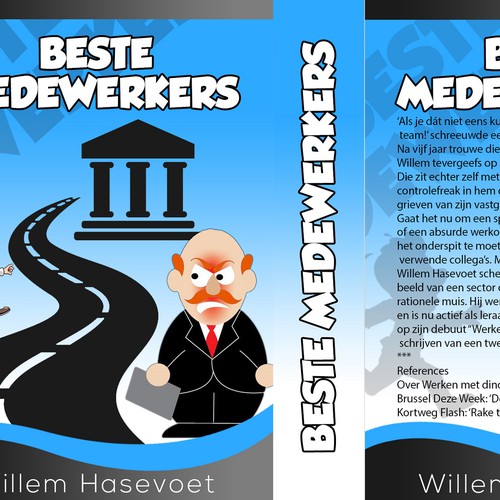 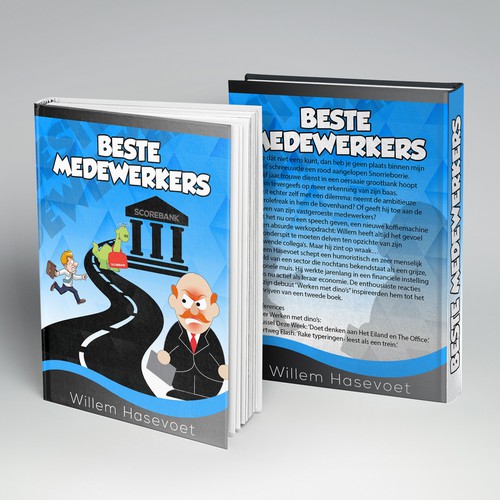 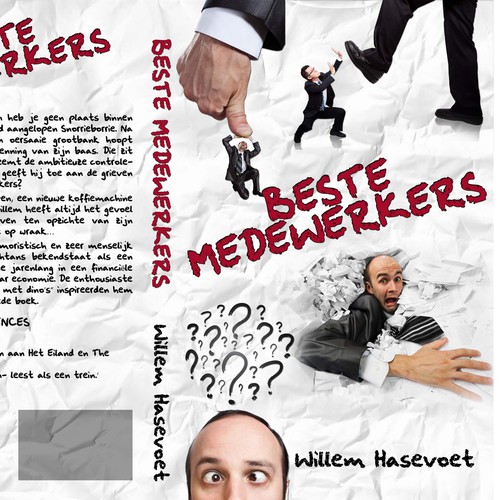 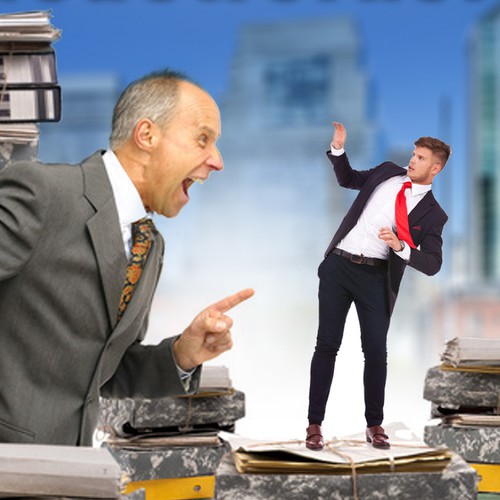 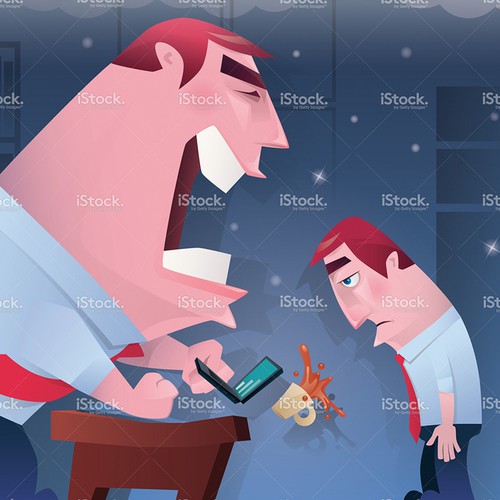 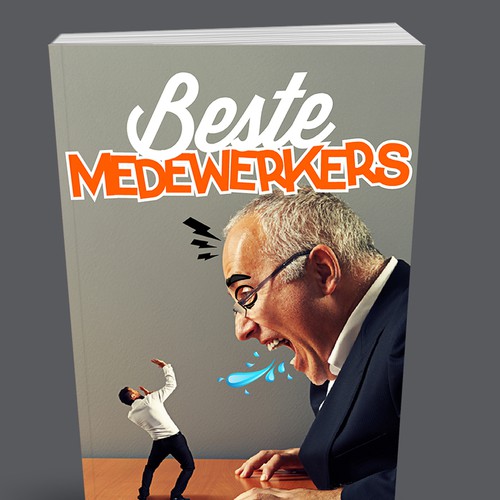 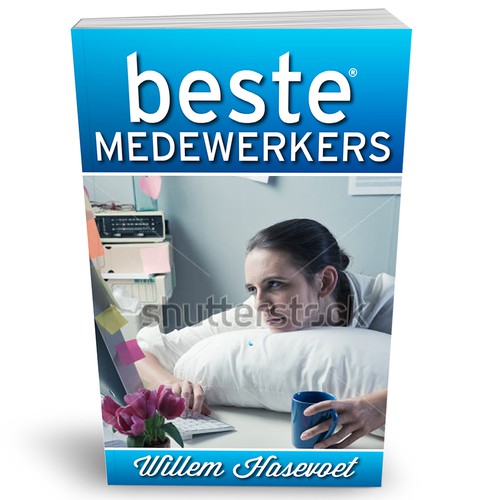 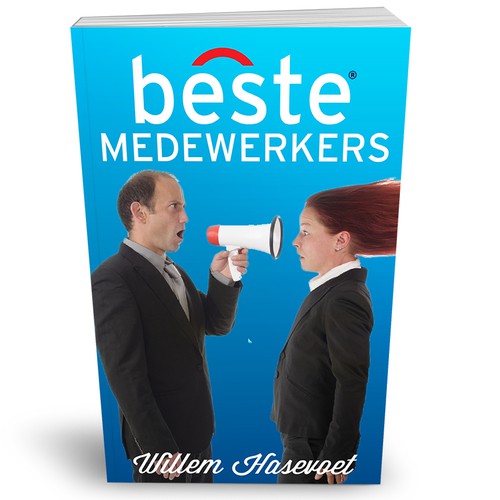 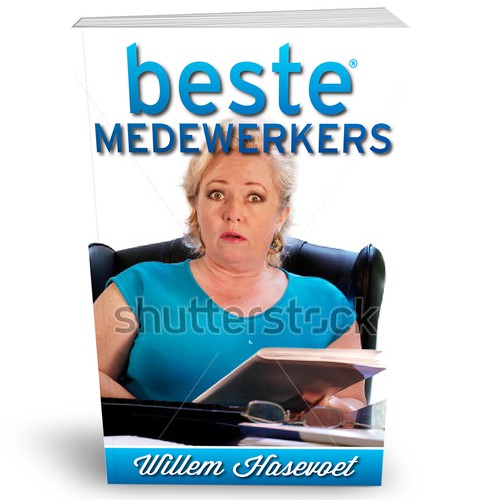 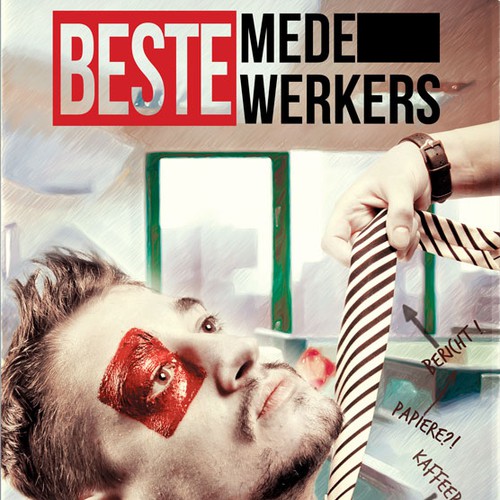 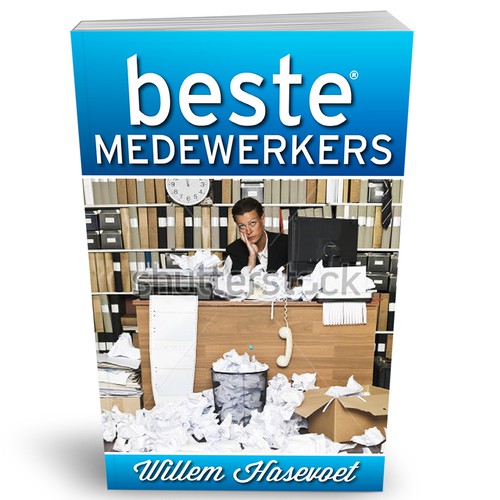 I've written a humoristic novell about '9-5'-live at the office (banking).

If you know 'The Office' on television you know what the book is about. If not: that's the summary (free translation from Dutch):

***
'If you can't even do this, then you have no place in my team,' yelled an angry blushing Snorrieborrie [bald bos with a moustache, +50years, not tall]
After 5 years of loyal service Willem [main character, young tall guy] hoped for more credits from his boss. But he struggles with its own dilemma: being an ambitious control-freak or doing what the never satisfied and inflexible other colleagues want?

Giving a speech, a new coffee machine or an absurd task at work: all of this gives Willem the feeling of pulling the short straw. But he wants revenge...

Willem Hasevoet creates a humoristic and very human picture of the financial sector, normally known as boring and rational. He worked for many years in banking and teaches Economy classes now.
***

The cover (in colour, no black&white) must show:
- humor (without being too childish)
- one/several people working (or pretending to)
-reference to an office desk and/ or bank building

Some examples of scenes from the book which could be useful:
- Referring to the first sentence: the angry boss yells at his young colleague, who looked disappointed/ afraid.
- Fat, bored, clumsy woman (50+) with chaotic desk. Her colleague looks angry at his coffee mug (50+, sandals&socks, beard like a homeless guy)

Please, feel free to combine/alter one of the above or make another design.

The book is in Dutch, so I attach the Summary text, which must appear 100% correct on the final design. After the *** I mention two reference from my first book, so you might put this in another Font/ design, to show it off.
I 'm writing under a pseudonym, so no pic. from me to add.

PS: you could look at the font and logo of Citibank or DeltaLloyd Bank for the titel and author...

book or magazine cover for Live on the Margin
299 US$
We need a cover for a book about learning to love risk, profit from fear, and retire tomorrow.
205
entries
43
diseñadores
Book Cover for Self Directed 401k - Total Control
499 $US
We create self directed 401k plans for people so they can take their 401k retirement funds and invest them any way…
99
entries
20
designer graphistes
Help The Options Trading Group with a new Kindle eBook Cover
USD 299
We are an educational company that provides tutorials on options trading.
57
entries
17
diseñadores
Joshua Tree Financial, Inc. needs a new book or magazine cover
US$499
We publish books/newsletters on trading.
27
entries
9
designers
Need your creative design for a book to be distributed internationally
US$299
Investment advisors...
37
entries
10
designers
Eye catching design for estate planning eBook
299 $AU
Publishing a book to assist the average family in Australia prepare an information record in the event of death or di...
72
entries
17
designer graphistes

Comece agora mesmo
best-selling author working on 4th book on retirement planning.
US$ 299
We educate investors on how to invest outside of the stock market. Primarily we are showing them how to buy into comm...
134
entries
21
designers
Looking for a Chinese illustrative book cover with a minimal feel for a well known economics expert!
£499
We are a PR Agency! One of our clients is a well known economist named Jerome Booth, he is planning to release a Chin...
65
entries
21
designers
Create a Book Cover for New Author - There are more to come!
A$299
Mortgage broking and advice around financial leverage and investment Target audience is small business people...
47
entries
7
designers
Create a professional, elegant, and fun financial book cover for Victor!~
CA$299
The book is aimed to educate people wanting to get into stock investing. Regardless of whether you are a novice or s...
109
entries
20
designers
7 Financial Planning Mistakes Book
299 US$
What we do: Protect Baby Boomer’s Retirement Savings Who we do it for: South Texas residents with investment account...
85
entries
19
designers
Design Book Cover for "The Financial Planning Puzzle"
499 US$
282
entries
28
designers
Saiba mais sobre design de capa de livro ou revista
Veja como funciona