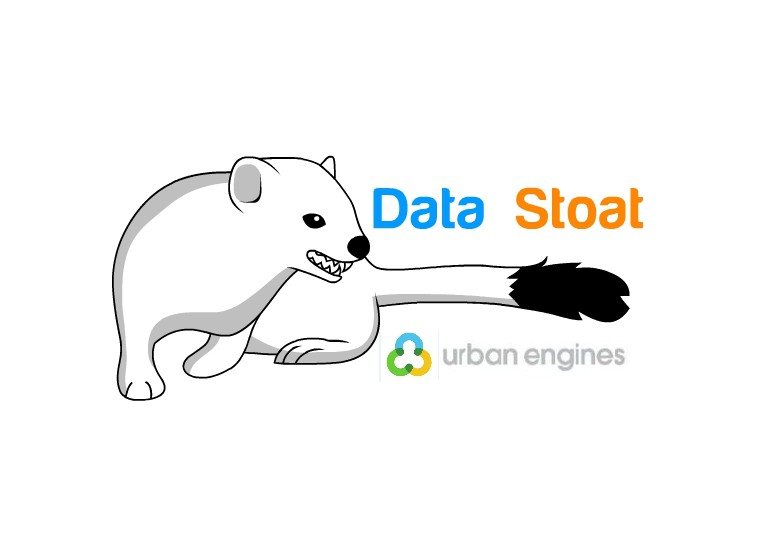 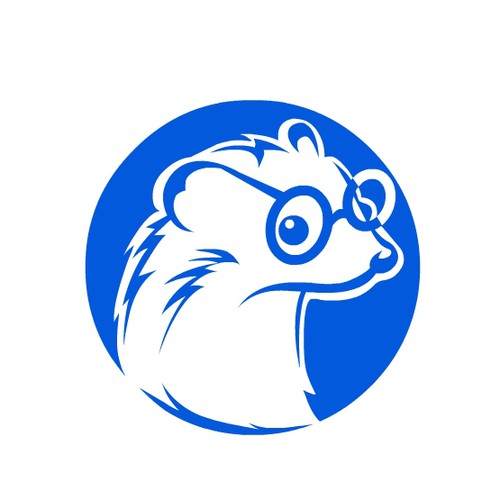 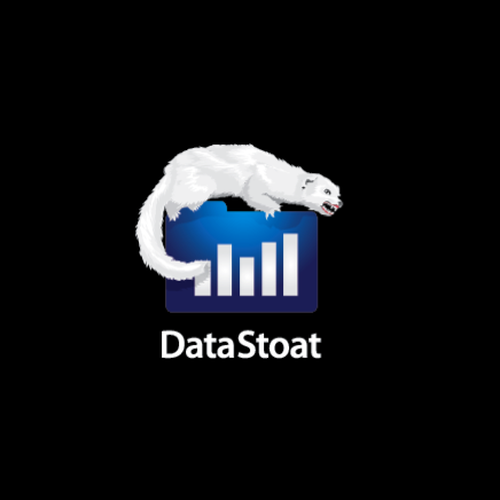 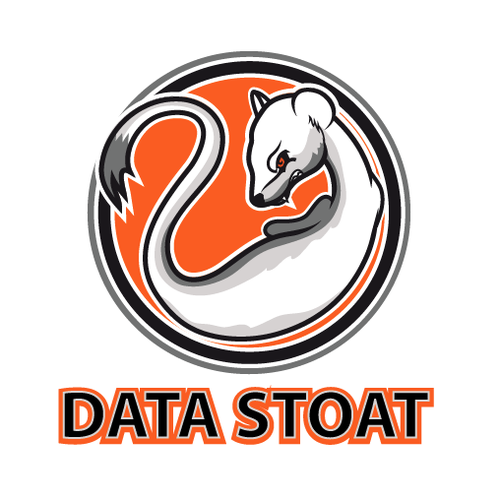 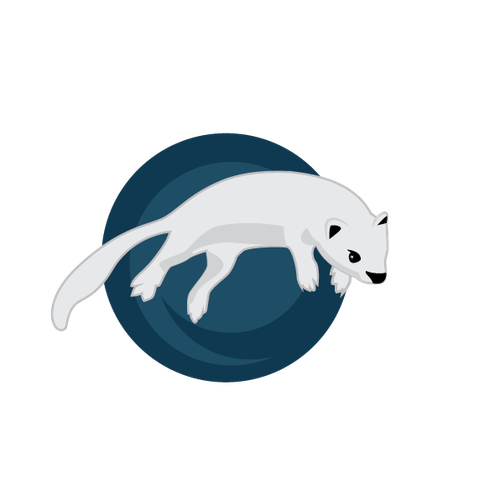 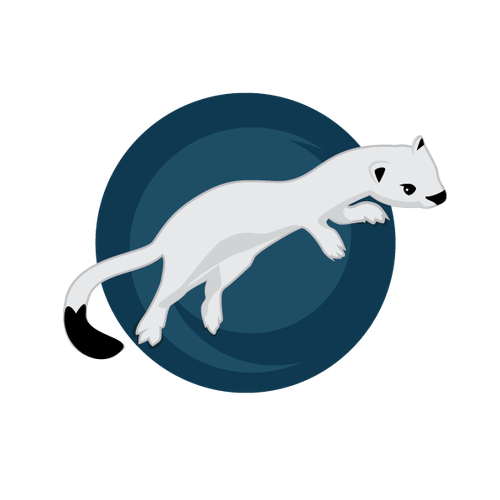 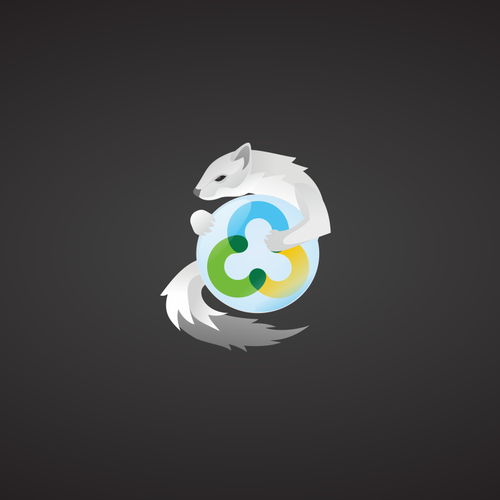 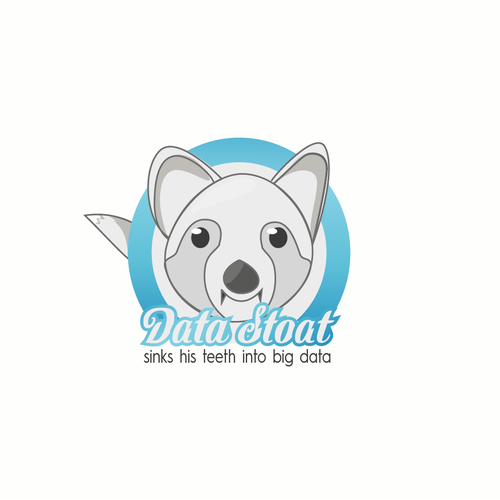 The general area is big data, data science, statistical analytics, machine learning. We develop fundamental tools, and we make these available to customers in attractive and easy-to-use front ends.

The goal is to produce a design that will appeal to bright geeky data scientists, e.g. mathematicians and computer scientist undergraduates. They should think "This is a company that is fun, and is into big data, and has strong science behind it."

I want an illustration or logo that can be put onto a T-shirt breast pocket, or mug.

The illustration is to be oriented around the mascot "Data Stoat", and it will have space for me to put in a variety of slogans, e.g. "Data Stoat sinks his teeth into big data". I want to use it on light-background T-shirts (white, light grey, pink) as well as dark-background T-shirts (black, dark blue, dark green) -- though these will probably have to be slightly different versions -- so I want something with simple use of colour. It doesn't have to be black and white -- greyscale, and use of other hues, are fine.

My initial thought was something along the lines of the Firefox or Iceweasel logo (attached): a circular frame; a cartoon stoat inside or wrapping around the edges; text around the outside of the circle. If you like, you could also take some design inspiration from the logo for Urban Engines (attached), the company I work for. However, you are free to be creative, as long as it leads to an illustration that I can use on a T-shirt or mug.

I want it to be quite distinct from Iceweasel: no globe, an emphasis on the sinuous shape of a stoat, and conveying the distinct characteristics of Data Stoat rather than some cuddly generic animal.

The characteristics of Data Stoat are as follows. He is wild and fierce. He is vicious, not out of malice but out of amusement at following his own spirit. He is excitable and playful too. Once he bites on to a big data problem that catches his interest, he will hold tight and not let go until he has made his kill. He has a strong sense of his own integrity, which is why he is so forceful at following his own spirit, and he will never give a half-baked data analysis, or produce an output that he doesn't believe in. Here are some videos that show what sort of character stoats have:
https://www.youtube.com/watch?v=HNbqvqf3-14
https://www.youtube.com/watch?v=OAG…freload=10
http://imgur.com/gallery/l8d8Lou

I'm attaching a picture of a stoat I have at home. (To be precise, he's more likely an American pine marten rather than a stoat, but it's indelicate to spend too much time thinking about his parentage.)

Creative Wall Design/Decal for the Office
$249
We sell ecommerce/shopping cart software ranging from small to medium sized businesses. Our software comes in many la...
32
entries
4
デザイナー数
Create very elegant and professional sketches for our services
USD 699
Our company is a bridge between an employer who needs a custom software and a programmer who can provide a custom sof...
29
entries
8
designers
A highly professional illustration for our About page
$699
We are creating a bridge between software programmers and people who need custom software....
79
entries
21
designers
Desktop Wallpaper for Netrunner OS 16 - Ozymandias
€549
Netrunner is an open-source desktop operating system based on Debian/Kubuntu: http://www.netrunner.com
144
entries
53
designers
Create an Explainer Diagram for mobile management app
US$249
We provide Enterprise Mobility Solutions to medium and large organisations in New Zealand and Australia...
5
entries
3
designers
Create a series of minimalist illustrations to explain our product
A$319
We build a content management system for writers and marketing professionals....
40
entries
15
designers