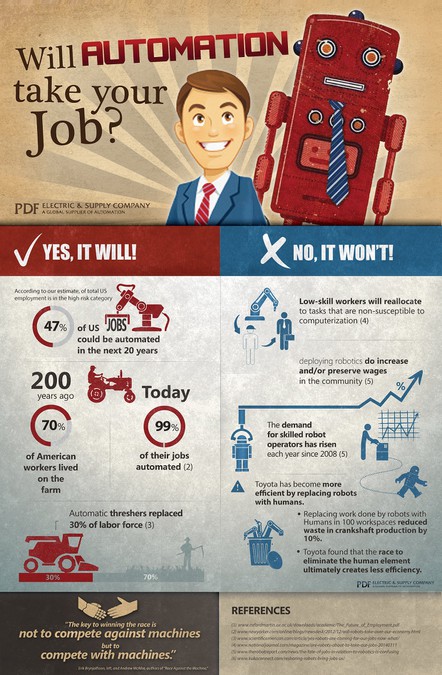 Create Infographic that argues both sides of "Will Automation Take Your Job?" 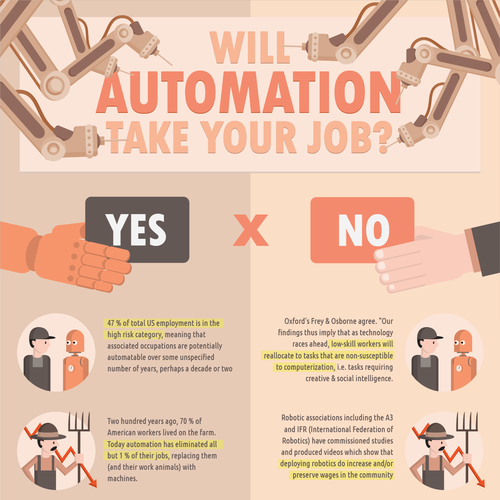 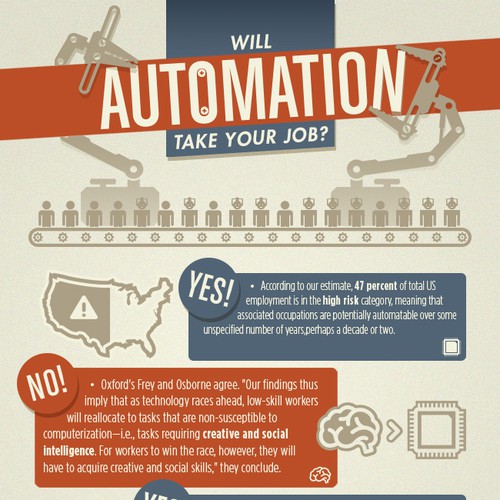 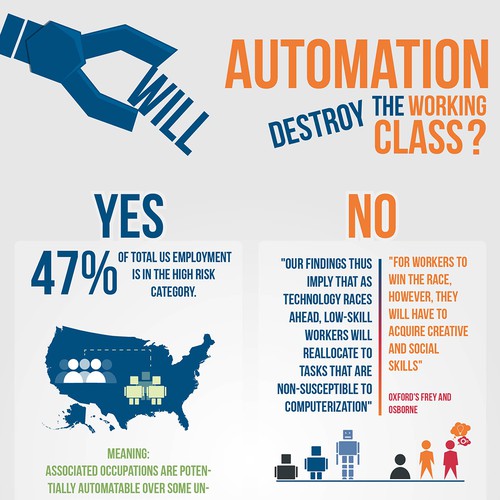 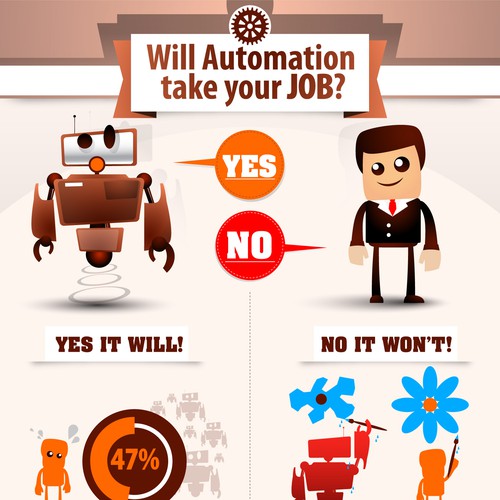 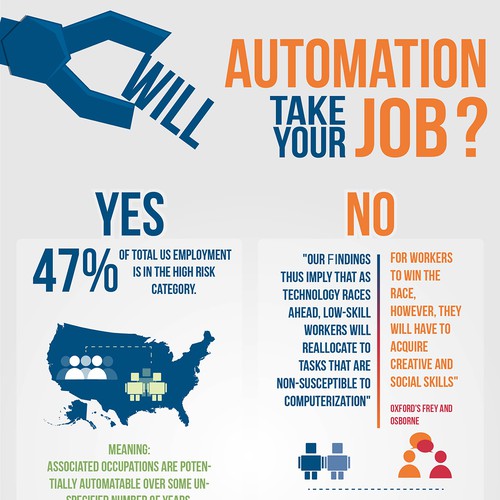 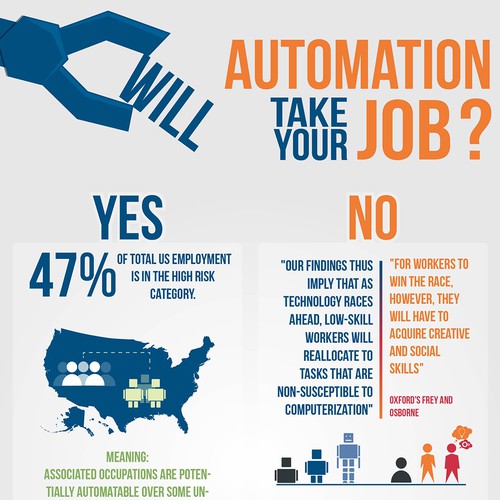 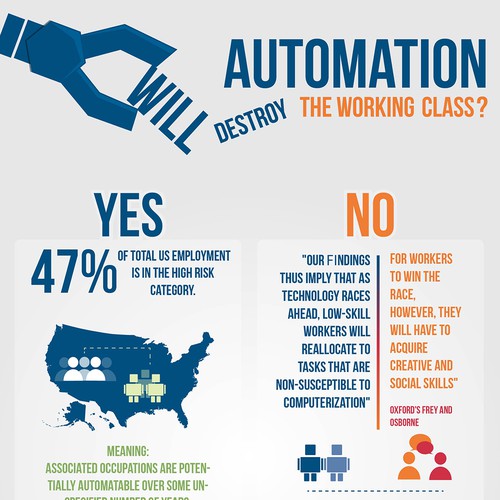 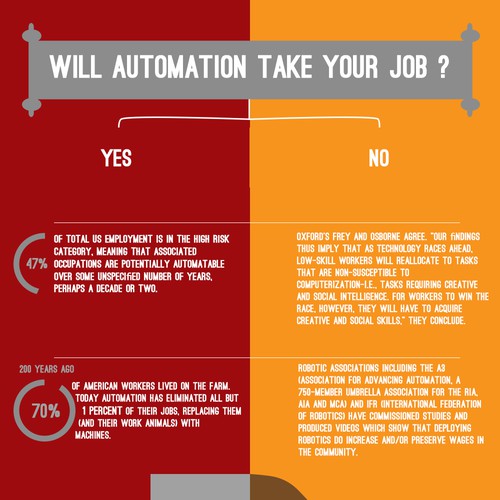 We are looking to have an infographic designed that takes an objective look at the question, "Will Automation Destroy the Working Class?"

To do this we would like the infographic broken up into two sides or sections (which ever you think goes best with your design), "yes" and "no".

We want the infographic to invoke a for or against reaction. Some people love the idea of automation, while others are scared that jobs are going to be lost. We want the inforgraphic to develop discussion. We also want it to be very shareable. Should be quick to understand and form an opinion.

Robots could also be used to form the point of automation replacing peoples jobs.

The points below answer the question, "Will Automation take your job?" (both yes and no).

YES, it will - According to our estimate, 47 percent of total US employment is in the high risk category, meaning that associated occupations are potentially automatable over some unspeciﬁed number of years, perhaps a decade or two. http://www.oxfordmartin.ox.ac.uk/do…oyment.pdf

NO, it won't - Oxford's Frey and Osborne agree. "Our ﬁndings thus imply that as technology races ahead, low-skill workers will reallocate to tasks that are non-susceptible to computerization—i.e., tasks requiring creative and social intelligence. For workers to win the race, however, they will have to acquire creative and social skills," they conclude. http://www.nationaljournal.com/maga…s-20140311

YES, it will - Two hundred years ago, 70 percent of American workers lived on the farm. Today automation has eliminated all but 1 percent of their jobs, replacing them (and their work animals) with machines. http://www.newyorker.com/online/blo…onomy.html

NO, it won't - Robotic associations including the A3 (Association for Advancing Automation, a 750-member umbrella association for the RIA, AIA and MCA) and IFR (International Federation of Robotics) have commissioned studies and produced videos which show that deploying robotics do increase and/or preserve wages in the community. http://www.therobotreport.com/news/…-confusing

YES, it will - "Automatic threshers replaced 30 percent of labor force in agriculture in the 19th century. But it happened over a long period of time, and people could find new kinds of work to do. This time it’s happening faster."  http://www.scientificamerican.com/article/yes-robots-are-coming-for-our-jobs-now-what/

NO, it won't - The demand for skilled robot operators has risen each year since 2008 - http://www.kukaconnect.com/reshorin…g-jobs-us/

YES, it will - "So far, people taking back work done by robots at over 100 workspaces reduced waste in crankshaft production by 10%, and helped shorten the production line." Toyota has become more efficient by replacing robots with humans.

NO, it won't - "Albertsons LLC, which owns seven stores in the Tucson area and more than 200 throughout the Sun Belt states, is removing self-checkout lanes from all of its stores that have them. ...the number of stores that have at least one self-checkout lane declined from 21 percent of stores in 2009 to to 16 percent last year... With the self-checkout, you're there in front of what's basically a computer. You could get frustrated and (store staff) won't know about it. Retailers want to be able to control their own destiny with the customers."  -  http://azstarnet.com/business/albertsons-pulling-self-checkout-lanes-in-tucson/article_1a5258f8-2e89-5a16-8b9c-bdb252c1bb59.html

Since we would like this to be a balanced argument, please include the same amount of "yes's" and "no's" in your design.

Study: 47% of US jobs could be automated in the next 20 years
http://www.americanthinker.com/blog…years.html

Quote we would like included at the end if possible...

- “the key to winning the race is not to compete against machines but to compete with machines.” - Erik Brynjolfsson, left, and Andrew McAfee, authors of “Race Against the Machine,” (http://www.nytimes.com/2011/10/24/t…html?_r=1&)

Elementos a incluir no infográfico

We are looking for a simple, minimalistic design that utilizes flat icons/graphs/etc.

Below are examples of infographic styles/designs we would like to emulate...

- http://bit.ly/1enRBRj (darta on jobs and automation)

Need to add client logo and information at the bottom. See http://www.pdfsupply.com

We would like to have a warm color scheme.

We really want a clear message for and against automation and job creation or loss.

When a reader sees the graphic we want it to be super easy to understand what we are communicating and let them have an opinion.
Is your job safe? Does automation scare you or excite you?
Will automation add to the quality of lives? Or will automation ultimately take away from our quality of life?

We want people to see the data and react with an opinion they want to tell the world about.