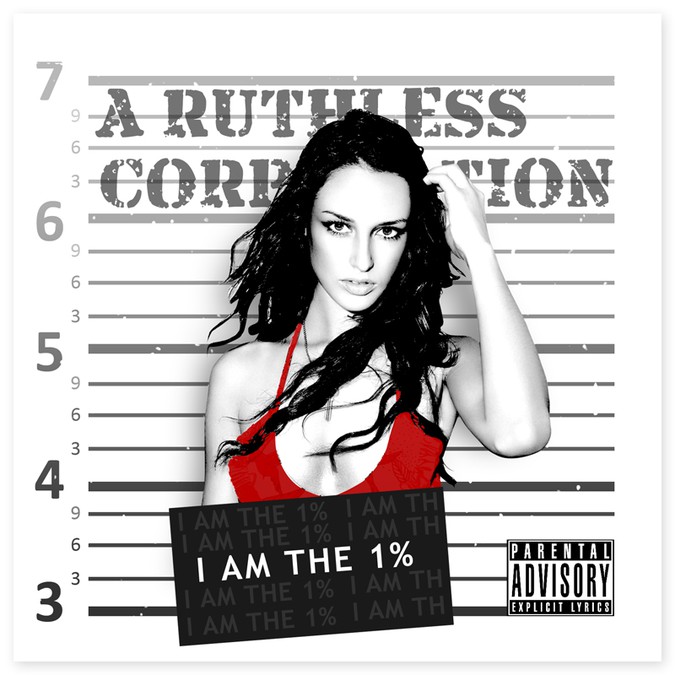 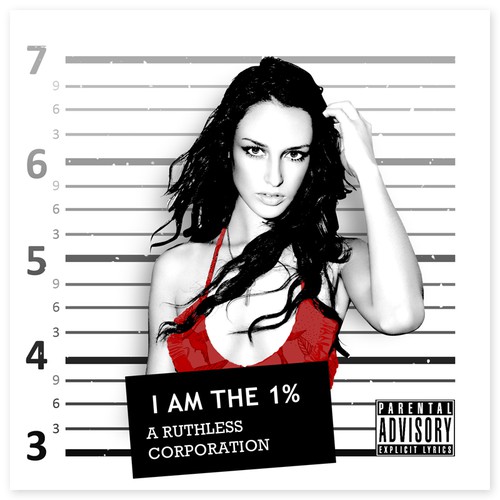 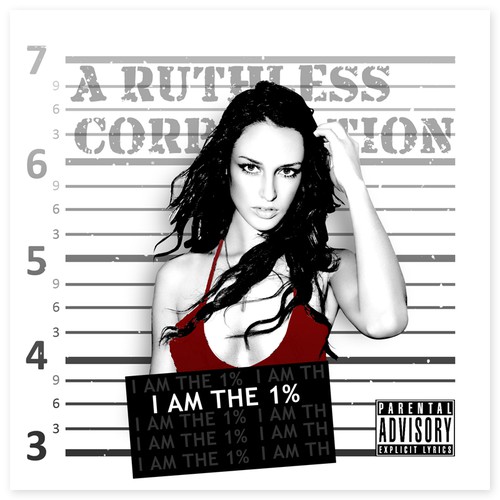 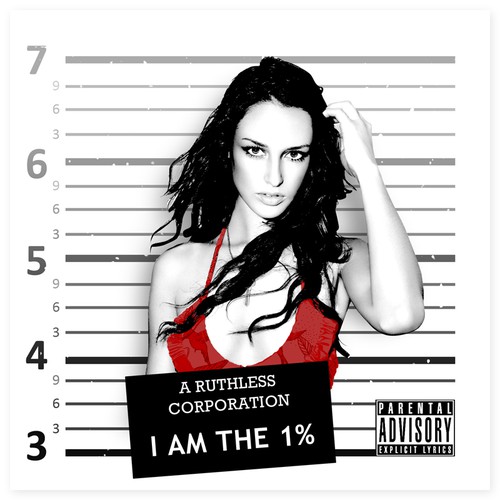 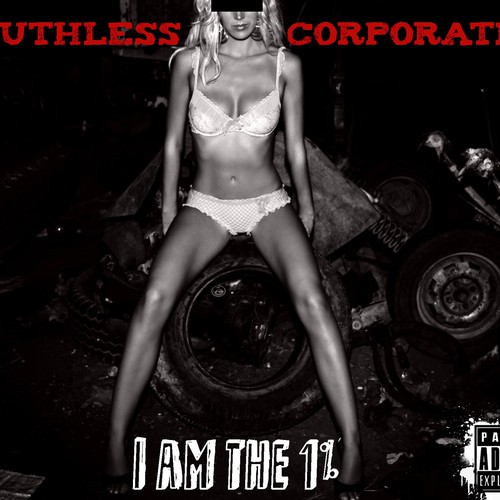 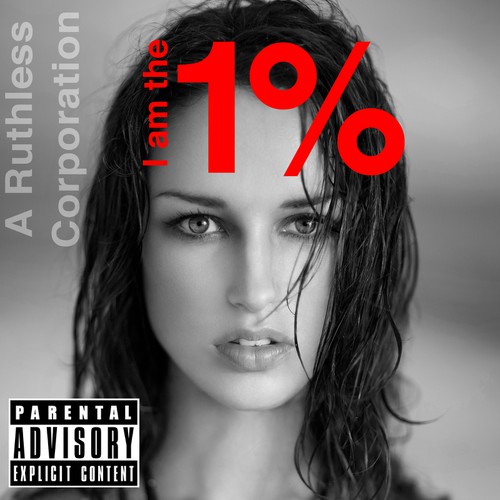 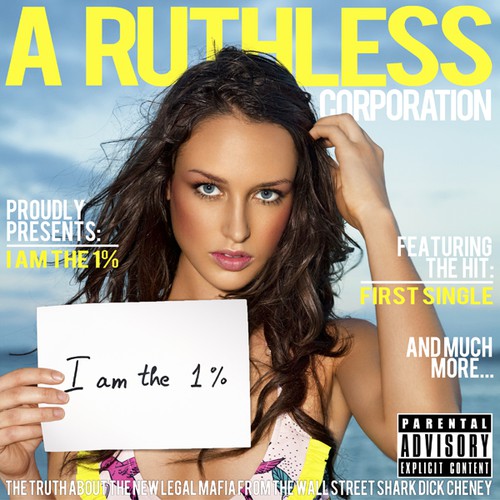 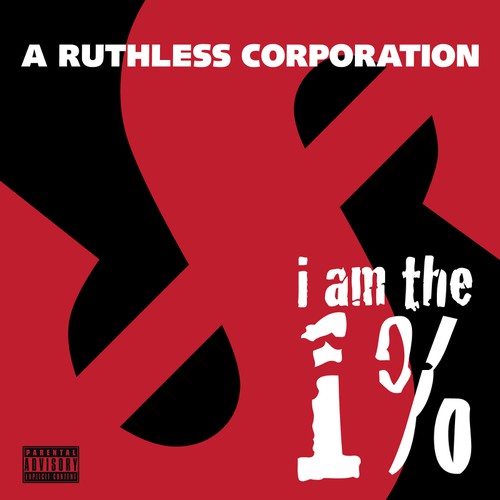 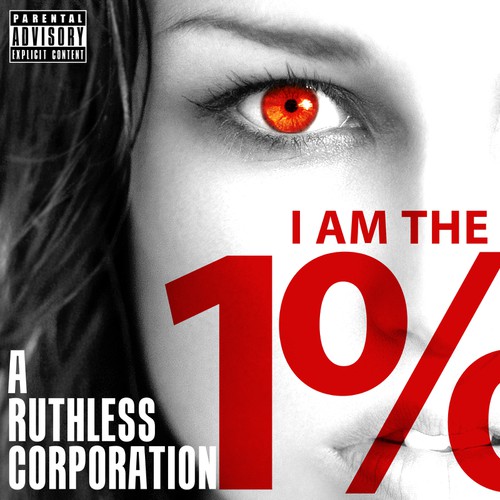 Brand People and Companies - take people and ideas to market :)

I need an Album Cover

it's a pop metal rock band

the name of the band is: A Ruthless Corporation
the title of the album is: I am the 1%

the band's lead singer is an asshole who is a super rich hedge fund wall street guy - he believes companies ARE the new legal mafia - and he openly celebrates that. he's rich. richer than Jay-Z rich. he's Dick Cheney if he was in his 20s and in a rock band. He's not a nice guy and he will and does kill people and things on a global scale through his many ruthless companies. hence the name.

open to interpretations and creativity
i only had one idea already in mind.
i am attaching two photos for the cover art - but i'm open to how it's used.

i like the idea of doing something that looks like a sports illustrated swimsuit issue - the band's name - "A Ruthless Corporation" could be in that SI font and the title of the album somewhere else. It could be that simple - you could cut part of her off, you could change the background -

here are the only real specifics that have to be met:

in the artworks final version in order for me to use it, it must:

and please put that black and white parental advisory stick on the cover.

i think i like the twisted corporate product angle (like this is a magazine cover) but i'm open to ANY other creative ideas. including NOT using this models image at all.

as long as it is totally cool.

ARC is a new band idea that hasn't existed before. it's pop metal music, but the lead singer is flaunting his money like a hip hop artist. He's a super rich wanna be rock star who doesn't care if he's a star or not because he's already overly rich and above the law.

Create the next design for (The) LC
$145
J Un & Knox Hill - two rappers, one mic, and any beat that makes your head nod
41
entries
14
designers
"The Expatriate's Wife" , Author Hery deHaan, book cover design
95 £
Book Design, paper back, self publishing, as kindle books on Amazon and as hard copy , print on demand
42
entries
11
designers
Corporate Social Responsability design
$200
We are a young&fresh communication agency specialized in web events
41
entries
10
designers
design for Enchanted 14
145 $
We are a rock band
86
entries
21
Designer
The Internet Musician Podcast needs album graphic for iTunes
$145
Record company and music marketing consulting
29
entries
9
designers
Create a book cover for Mr Mark Anderson Esquire
US$ 145
I am a writer of novels
55
entries
18
designers